When Bob Feingold decided to start his business back in the year 2000 he had previously managed the medical ultrasound business at Phillips. When he approached Brown University to see if they had any technology he could license, his experience allowed him to see the rare opportunity in their array microphone that used the same technology used in ultrasound. This was the beginning of his company, now called Acoustic Magic, which offers some of the most affordable and reliable high quality array microphones on the market today.

Learn more about Bob's Company, Products, and use cases in ConferenceCast Episode 4: Acoustic Magic. Listen, Watch, or read the transcript below and make sure to hit that subscribe button!

"Ease of use is one of the biggest advantages, you just plug the Voice Tracker in and it goes! The second big advantage is it's extremely reliable. We've been shipping the Voice Tracker I since 2002, and the voice-tracker 2 since probably about 2010 and we have well under 0.5% failure rates. People just plug them in (and leave them on) and there they go."

Emily: Hi everybody. This is Emily Richards and I'm here with Bob Feingold of Acoustic Magic. Bob, could you introduce yourself?


Bob: Sure. I'm Bob Feingold. I'm the founder and president of Acoustic Magic. We're a privately held microphone company located in the suburbs of Boston.


Emily: Great. For anyone out there who's not aware of Acoustic Magic, can you just give us a little overview of your company? 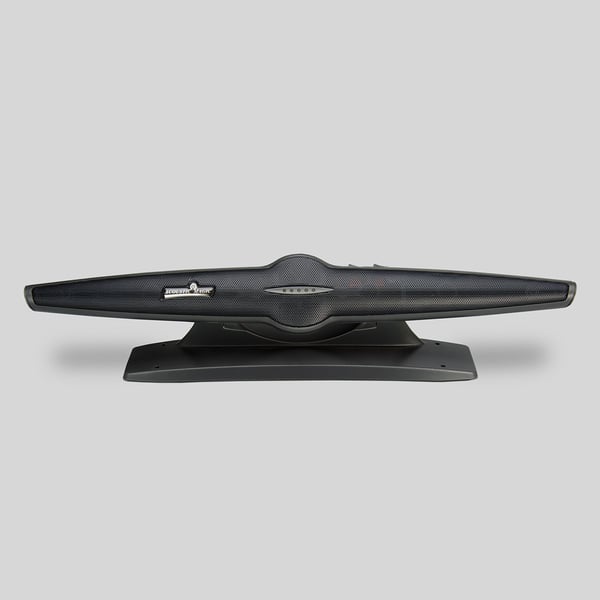 Emily: Great. How about just a little history how Acoustic Magic came about?


Bob: Sure. I was looking to start my own company in the year 2000. I had a background in and managed the medical ultrasound business with Philips, and went around to schools in the area to see if they had any technology they could license and it turned out that Brown University had an array microphone which is the same technology that is in ultrasounds. I immediately knew what it was, so I licensed the technology, I hired a couple of PhD's from Brown that had done their PhD in this and by the year 2002 we were shipping the Voice Tracker I.

Emily: How cool. That's a great story. I love it.


Emily: One of our favorite products, and you've touched on it already, but we use it in some of our easy-to-use video conferencing kits, is the Acoustic Magic Voice Tracker II. Can you just go into a little more detail about the product and what makes it so great for video conferencing? 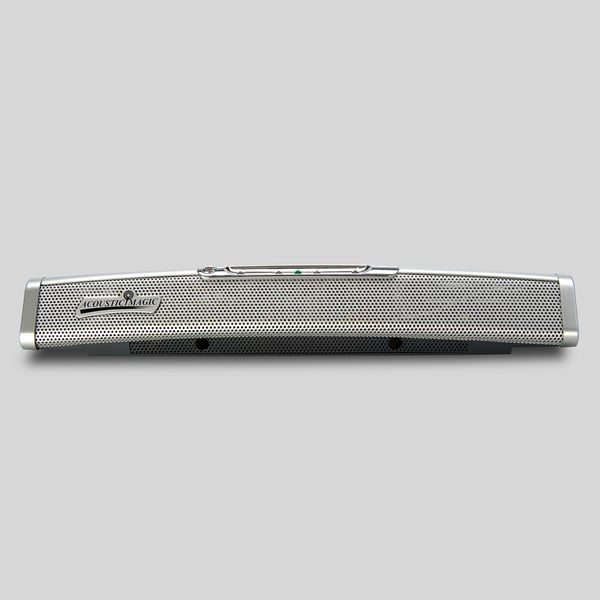 Bob: Sure. As I said before, the Voice Tracker II...first of all, let me go back into the technology. When I said scanning array microphones what that is is the microphone forms a listening beam, kind of like a searchlight, and that automatically electronically steers this listening beam towards the active talker and as a result of that, is two-fold:

So, the spatial filtering helps on the noise side and (2) the fact that it's an array microphone means it has six or eight microphones that are always on and added constructively. So, a combination of the constructive addition of the microphones and the spatial filtering is what gives it the pick-up range and the fact that it automatically steers around the room gives a wide field of view.

As I said, an important part of conferencing is acoustic echo cancelation. Acoustic echo occurs when you're in a conference and the far-end talker's voice comes into the near end through a loudspeaker and the microphone picks that voice up and sends it back to the far-end talker and he hears an echo. It has nothing to do with the near-end. It's an annoyance to the far end. The Voice Tracker II has a built-in acoustic echo canceler that takes care of that issue. The other things that people like about it is that it's pretty small, it's got a USB audio output as well as an analog output through a 3.5 mm connector. It's just plug and play. The DSP, or the intelligence, is in the microphone so you just plug it in to your computer either by USB through the 3.5 mm plug and you're set to go.


Emily: Great. We love the easy-to-use and also echo cancelation is just so important.


Emily: Another question is, what are the advantages of your technology versus the more expensive array microphones?


Bob: Sure. When we started in 2002, array microphones were fixed-look, fixed-direction microphones. If you were in the field of view, they would pick you up; and if you were not in the field of view, they wouldn't. It was a pretty narrow field of view. Recently, some competitors have come out with some array microphones that actually cost an order of magnitude more, somewhere between $3,000-$5,000. What they do is have a number of fixed beams, maybe four or five or six beams that you have to set up, the user has to set up, so that it's pointing at the people in the conference room. The fact that they have multiple beams makes them more expensive and the fact that you have to set them up makes them much more difficult to use.


Emily: Perfect, reliability is very important to our customers. So what types of businesses or people are using the product, or maybe better phrased, what are some of the applications besides just conferencing?


Bob: The biggest application, other than conferencing, has been lecture recording in schools, especially with the Voice Tracker I. Because if you're just doing a recording you don't need the echo cancelation. There are about 400 schools and universities that use them. They record the lectures, they put them up on the internet and the students can go back and review the parts of the lecture they need to study a little bit more. Essentially one Voice Tracker in the room can pick up the professor as he moves around or pick up questions from the class. And much more economical than having multiple microphones and a mixer.


Bob: Any kind of meeting recording, in fact. Town meetings where people are sitting in front of the meeting, the board members or something like that, and there's people in the audience that can ask questions where again one Voice Tracker sitting up on the podium with the town management can pick them up but also pick up the questions from the audience.


Board room meetings, Court rooms, same thing. You can record the lawyer as he moves around to the witness box or to wherever he moves around and the Voice Tracker will just follow him. So, any kind of meeting recording or conferencing applications are just ideal.


Emily: Definitely we love that your microphones follow the speaker. Lastly, I'll just give you the floor to expand on anything you feel like we missed. Anything else you feel like you should add.


Bob: Sure. I want to mention that the Voice Tracker I is having a resurgence. It doesn't have acoustic echo cancelation built in, but some of the voice-over internet products today, like Zoom and Skype, have improved their acoustic echo cancelation so you could connect the Voice Tracker I to systems using Zoom or Skype or anything that has a really good echo canceler. And you have a more economical solution to your conferencing products.

The Voice Tracker Electronically Locates and Automatically Steers toward the Talker

The other thing that's happening now is because of our low price, I mean we're under $300 compared to a $3,000 array microphone or compared to using multiple microphones and a mixer, but because of that low cost we're finding people using large number of Voice Trackers in a large number of rooms. We recently sold 450 Voice Tracker I's to a hospital and I believe what they're doing is putting a video conferencing setup in each room in the hospital so the doctors don't necessarily have to walk into the room. They can have a video conference and capture the patients and nurses and anybody else that is in the rooms. So Telemedicine is an up and coming application that we are very interested in.


Also distance learning, we've sold Voice Trackers into schools for lecture recording, but now Distance Learning (which is also a voice-over internet-type application) is taking off as well. Even companies that have a large number of Huddle rooms, some guy we sold to had 3 or 4 rooms on each floor in the open area where there are cubicles, so they were buying a number of Voice Trackers and putting them in and they appreciate the low cost.


Emily: Definitely. Well we absolutely love your products for their ease of use, and of course the low cost. That's exactly what we wanted to do here at Conference Room Systems is just make conferencing easy and accessible to every budget, every kind of business. I just wanted to let everyone know that you can head over to conferenceroomsystems.com to learn more about these Acoustic Magic products. We have a ton of videos and all sorts of information. Bob, thank you so much for joining me on ConferenceCast.


Emily: Really appreciate it. Have a great day.

Tune in Next week for our interview with Cambridge Sound Management.

Have a question for one of our upcoming guests?  Ask now: