This week we had the opportunity to speak with the world's leading provider of sound masking solutions, Cambridge Sound Management. Mark Hughes, the senior marketing manager at Cambridge, takes us through the company's beginning and into how the technology is used and where. Learn about the variety of spaces sound masking can be found, from open offices to spas!

Thank you for listening to ConferenceCast!

Q. Mark, tell our listeners about yourself

I work for Cambridge Sound Management. We're the world's leading provider of sound masking solutions. Sound masking is the process of adding an unobtrusive background noise to an environment to cover up excess speech noise from the environment. If you take the typical open office workspace that you're in and you're hearing people from 50-100 feet away, that's because the noise floor there is really low, right? So, we're artificially bringing up the noise floor so that speech at a distance of more than 15 feet away fades into the background, you don't really hear it.

You can understand that people are talking, but the white noise-like sound is covering up that speech, making it easier for you to concentrate on the task at hand. There are a lot of great applications for this: open offices are our biggest customers, but we also have a lot of work in hospitals where we're helping patients sleep better and also making it so they aren't hearing a lot of things that they shouldn't, whether it's at the reception desk, in a patient’s room, law offices, courtrooms, basically anywhere there is an unintended conversation that you don't want everyone to hear.


Q. How did Cambridge Sound get into this niche world?


Our founder, Jack Hind worked for a consulting firm in the Boston area now owned by Raytheon. They actually developed sound masking technology back in the 50's. He worked for the creators of sound masking. He is a very world-famous acoustician and saw an opportunity to get sound masking going. He saw where the market was going for sound masking and started his own company and it worked out very well. He also had a new approach to sound masking, he basically invented direct field technology.

Prior to Cambridge Sound Management, sound masking was always a speaker above your viewing tails, it was pointed upwards reflecting the sound off the deck and then it would disperse the environment below. He came up with a speaker emitter that has a wide enough dispersion so that you can have sound masking inserted directly into the environment. Prior to him coming up with this speaker, you would need way too many speakers and they would be all over ceiling, so it wouldn't be an efficient way of inserting that screen into the environment.

With his QT-emitter we were able to have much fewer speakers and much more uniformity of coverage because there was nothing between your ear and the sound masking noise besides air. Once we created this system of sound masking, and I'm sure we're not the only factor involved, open offices are more prevalent now than they once were - almost everyone has one now, but one of the reasons I think sound masking has become more of an essential build-in product is the creation of the QT-system. 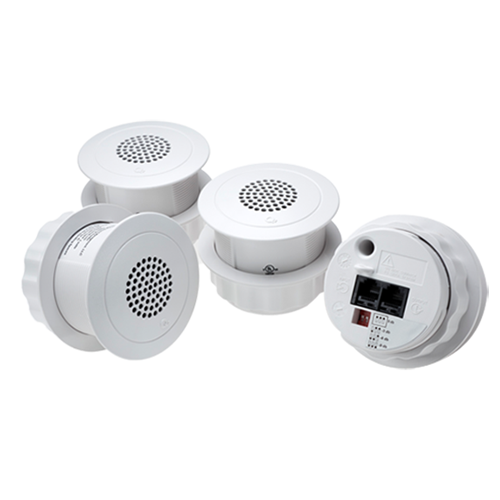 Q. Can you tell us how your emitters work and what they're doing?

The noise we're inserting, I call it a white noise-like sound just because that's what customers are familiar with, but the frequency itself is much more sophisticated. It's designed specifically to cover up human speech. With the noise, it sounds like air or water flow sound, that’s what people describe it as. Or like HVAC noise, so it sounds like the rest of the building. But what it's doing is it's taking all the consonants out of speech so that everyone speaking over a distance of about 15 feet away ends up sounding like Charlie Brown's teacher, like a "Wah, wah, wah". You don't hear them very clearly anymore and as I mentioned before they aren't as distracted as they were previously.

Q. Can you tell us some of the places or ways that people are using sound masking?


Open office is the main use, I think it's probably about 80% of our business. Another one, like a medical office or clinic when you are checking in at the reception desk you don't want to have everyone in the waiting room overhearing what you're saying to the receptionist. That could potentially be embarrassing information or a HIPPA violation. Or, if you're in the doctor's office, one thing we notice with modern construction is that walls aren't being built all the way to the ceiling deck anymore. They are just built to be a drop ceiling. So, you're getting that sound transmission over the wall. With sound masking, once you close the door to an office you're not going to hear things from the corridor or the adjacent office, that's one benefit of it too.

Another one in the healthcare field as well, in-patient facilities are hearing stuff in the corridor from people talking, the patient next door to them, or the nurse's station outside. And there is a survey after a stay at the hospital where they ask, "Was my room always quiet at night?" And hospitals always get dinged for this, and we can help with that and boost those HVAC surveys and make it so that it's a little bit nicer and they score a little bit better.


Healthcare is just one other industry. But we're installed in auto dealerships and banks where financial information is being discussed and you don't want everyone else to be able to overhear it, certain kind of retail environments where financial information is being discussed, call centers where you might even hear somebody else's conversation clearly where A) that's distracting and B) that might be information that you're not intended to hear. So, in that call center environment, we're really helping there as well.

There's lots of different places. Government is another one. We're in a lot of secure room facilities where it's imperative that nothing in that room is overheard by anyone outside of it, so we can help with that. We even have, through our Dynasound line we have some anti-eavesdropping equipment which we're putting speakers and transducers on top of air ducts and windows to prevent from espionage measures. So, we've got a lot going on to help make sure people don't overhear things they aren't supposed to.

We're also in a lot of spa's and things like that as well which is a funny group that I forgot to mention. Especially since a lot of them are in strip malls and places like that. You know, where you see Massage Envy, or something like that. They are getting sound transmission from the store next door into their spa. And when you're at the spa, you don't want to necessarily hear what's going on at the Chinese restaurant next door. So, it really does have a lot of different applications.

Q. Tell us about the Different Solutions Cambridge Sound Offers


I mentioned the direct field solution before. That was how Cambridge Sound Management started. And I mentioned that previous to this, sound masking was done indirectly with the speaker that was pointing upwards and reflecting sound off the deck into the space below. Now we can do both kinds of technology. We acquired Dynasound which is actually the first company to start doing sound masking specifically, not any other kind of distributed audio, but just starting with sound masking. They've been around since the 70's and one of their big product innovations is that they can control each individual speaker through software. It's a POE system, so there's a speaker controller in the ceiling that you can turn up the volume or turn down the EQ, or whatever, of speaker 1 on box 14, or what-have-you. So that's really useful in the sense that when you're working with a plenum system you want to make sure - there's a lot of stuff in the plenum, like air return ducts and pipes - that you want to make sure that you are able to tune each speaker individually so that you have better granularity and better uniformity of coverage.


We can get similar uniformity with an indirect system, such as our Dynasound system, that we can get with our direct field system. That's one big thing that we've been able to do. And we've actually been able to combine our systems a little bit. We can put our direct field emitter on the Dynasound Pro system. So, if you wanted a completely controllable networkable direct field system we can do that as well. So, there are a lot of exciting things going on in this world and we continue to innovate.


Q. Can the emitters be used for paging and Music throughout the office?


Yeah, absolutely. We created an active emitter. Previously, our emitter was a passive device, so we couldn't get too loud with it. We could get about 60 dB. Now, the active emitter, which is a powered speaker and only requires us to be able to pump a little bit of excess external power to the system and otherwise the cabling infrastructure remains the same, but with a few slight modifications with our system we can get up to 74 dB. So that's great for an office page that most of the time you would need a general "Please come to the front desk" kind of office page. But we can also do pretty good background music through it too because we were able to get to about 110 Hz, so that's pretty good bass. And we've used it in our office for music and things like that. I think it would work well for most companies that have some background music needs or even to do a little office party or something like that.

Or Build Your Sound Masking System and Quote Here:

Thank you for listening to ConferenceCast Make sure to subscribe on iTunes!