What is Skype Meeting’s for Broadcast?

How easy is it to get set up?

Microsoft claims they want to “democratize live broadcasting” by making the technology easily accessible through it’s Office 365 and Skype for Business platforms. Setting up an event can take less than 5 minutes and Microsoft has integrated the process with their suite of programs including Office 365, Outlook and Exchange to simplify the event creation workflow. Skype Meeting Broadcast is effectively everything a enterprise company would need when it comes to simplistic live broadcasting of Skype for Business meeting. Unlike YouTube Live the entire system can integrate with existing Microsoft platform. But unlike YouTube Live's RTMP system which allows for third party live production software integration Skype Meeting Broadcast is basically a live broadcast of your Skype Meeting (no fancy overlays, lower thirds and stingers you will find in professional broadcast software). That being said Microsoft has choosen to build on their already sucessful Skype for Business platform to offer superior control and integration with enterprise installations. Skype Meeting Broadcast allows for detailed control over who can access, view and participate in your meeting broadcasts which is fully integrated into Active Directory, Outlook and Exchange.

YouTube Live and Skype Meeting Broadcast are quite different in their offerings and market position. They share a similar cause “Democratize Live Broadcasting” but their end products are significantly different. The biggest difference for professional broadcasters is RTMP integration that YouTube Live has standardized on. RTMP is the industry standard allowing the major production software such as: NewTek TriCaster, vMix, Vidblaster, Wirecast and others to send produced broadcasts to the Content Delivery Network. Skype Meeting Broadcasts end up being exactly what the name implies: A broadcast of  your Skype for Business Meetings. Personally I think it's silly to add multiple cameras as participants in a Skype meeting but hey this is a powerful software and that's the way they wanted it to be.

Below we have a side by side chart of the most important features:

Are you going to InfoComm 2016? We want to see you there! 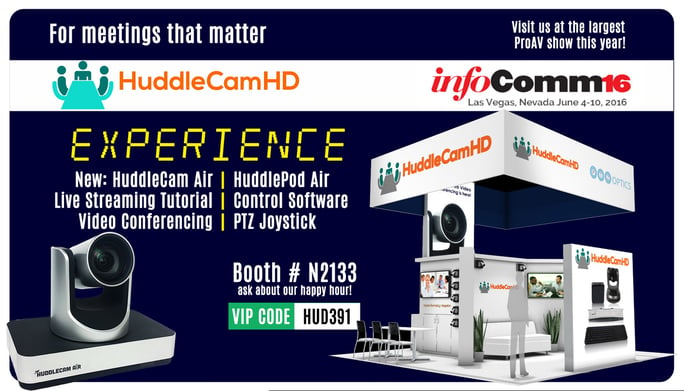 HuddleCamHD hosts live webinars every Friday at 10AM PST and 1PM EST. This week we will be talking about Skype Meeting Broadcast and how it’s use in business will effect the live streaming market. Tune in live or watch on-demand (after the event) on YouTube here.