Valerie, Donna, Scott work at the University of Texas at Austin School of nursing’s simulation center. This facility is known for its cutting-edge technology including Robo APRN or Robo-Advanced Practice Registered Nurse. This robot was employed to help train students for telemedicine use in the workforce. We wanted to learn more about the need for telepresence and how using RoboAPRN is helping our future healthcare workers.

So what is Robo APRN? What does it look like? How does it function? What do we need to know - the basics?

Valerie: My name's Valerie Dinesh. I'm an assistant professor here at the School of Nursing, and from a technical perspective, the Robo APRN is a remote presence technology that we're using that we can describe as being semi-autonomous, internet enabled, real-time, two-way audio-visual communication to move around in a wireless environment.

However, from a more kind of casual description, we also call it a version of an iPad on a stick that gives a clinician from an offsite location the ability to assess and evaluate patients at the bedside and to interact with other health care providers. The version that we're using is based purely on the audio-visual component, but there are vendors and platforms out there that have different kinds of attachments and accessories depending on the specialty use case.

So, my background and training is in intensive care critical care nursing, and the stethoscope attachment is pretty standard in remote presence use for ICU clinicians. For telemedicine placements that are in different kinds of primary care environments, they may have attachments for ear, nose, and throat examinations, it just depends. In our case, we're focusing on the psychiatric nurse practitioners. So, our model is perfect for really facilitating the conversational and the image.

Scott: This Scott Hudson, the director of the simulation lab. The video component of RoboAPRN is a high definition camera with a wider angle (see examples of wide angle lens cameras) than your usual iPad camera. Moreover, it also makes use of the built-in camera as on the iPad to allow the operator to look down to see where they're driving so they can see like a chair leg or something that they're about to drive into or figure out what they just drove into. 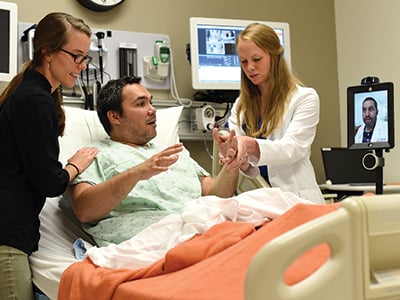 So, before you had Robo APRN how were you training students if you even were on telemedicine practices? Also, how has it changed the way students learn?

Donna: This is . I'm the director of the psychiatric mental health nurse practitioner program and unfortunately before we had the Robo APRN we were not doing much telemedicine training at all. We were using field calls for consultation and orders by phone method which is pretty much the real world in many facilities. So, we decided that since many of our students were becoming employed in telemedicine after graduation and that it was essential to build in these competencies into their education. Moreover, currently, those competencies are minimal for technology in general and focused mostly on the use of electronic medical records. Also, in a review for references describing training psychiatry residents to deliver mental health care via real-time video conferencing, of the 20 articles none described a robust needs assessment and only four defined learning objectives. So outside of the Graduate Medical Education world, professional guidelines do exist for telemedicine and tell us psychiatry is limited. So they don't focus mainly on the delivery of telemedicine.


Valerie: You know we're excited to bring it into the education timeline as opposed to what is usual practice of getting all of the telemedicine orientation competencies in practice use post-graduation. So, we're excited to be advancing that timeline.

Donna: Right. So, the graduate student service providers that are being consulted for orders through the Robo APRN and the undergraduates are serving as registered nurse students who are dealing more hands-on with the detox patients which is what we chose to use as our first simulation.

Why is telepresence important? Is it more important than ever before? Alternatively, is it just finally getting the traction that it's always really needed?

Valerie: I can speak to the trends that we're seeing from a critical care perspective, and tele-ICU's are increasingly coming into use in the United States. And recent studies of looking at billing data through CMS - Centers for Medicare and Medicaid - the estimates from a billing perspective are that approximately 10% of ICU beds in the US are staffed via telemedicine and the researchers that are doing those studies - mainly Jeremy Kahn out of University of Pittsburgh - the estimates are that we're just about at the saturation point for telemedicine for ICU bed coverage. But I think there's a lot of variation across disciplines and uses. From the ICU perspective, the bulk of E-ICU or tele-ICU settings are in small rural hospitals. And I think that trend remains persistent in the psychiatric and mental health services approach that we're exploring and modeling in the education setting with Robo APRN. I'll kick the ball over to Donna to kind of talk about the implications telemedicine for psychiatric care.

Donna: Sure. The the psychiatric residents and psychiatric nurse practitioners that are graduating are not keeping up with the growing population, especially in a rural state like Texas. There are just not enough providers to reach the need that is growing for mental health care. And so, a lot of the care is being provided through telehealth. And it's predominantly for Medicaid and Medicare patients in clinics that are far out in East Texas and out in West Texas. However, it is a typical job for new graduates to take on. Like we said before, and that's kind of what gave us this idea to utilize the revelry period for the psychiatric mental health nurse practitioner program. 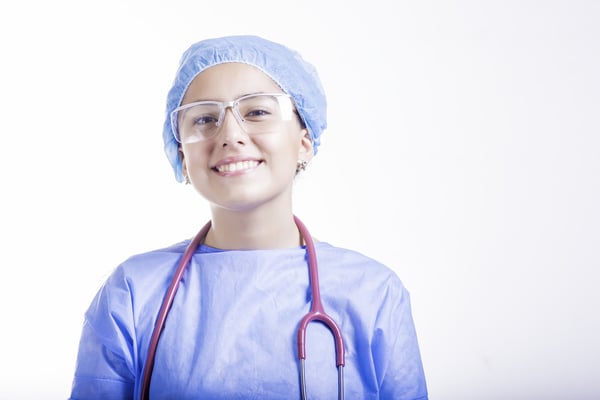 You're extending the reach and the number of people that you can care for without really that much extra expenditure. Am I right?

Donna: Right. It's very affordable actually to employ one of these robots.

Scott: Yeah, the dramatic increase in availability of high-speed wireless Internet through Wi-Fi or 4G has made it much more available on a wider spectrum regarding where these kinds of services can be provided where you've got both at least both the video and the audio. Having the video access allows the practitioner to do a much better assessment and also allows for a better provider and patient interaction because they can see each other and the advantage of doing it with a robot is it gives the providers the ability to look somewhere else when they need to rather than a fixed camera.

How effective is remote care?

Valerie: I think that you're pressing on a critical point and there are indeed lots of teams out there assessing outcomes on a large scale. However, to date, a remote presence in telemedicine are tending to replace telephone-based communications. Comparing telemedicine to telephone is a no contest kind of comparison, but I think the jury's out as far as comparing telemedicine to traditional in-person; but because the majority of the replacement is replacing much lower fidelity and kind of lower technical capabilities that there's not too much question in that area.

Donna: To add that, qualitatively speaking, patients seem to be responding to this type of care very well and have a good experience with interacting with telemedicine and don't seem to find it odd or invasive or anything like that. They're finding it to be the norm of what they're used to being their healthcare experience.

Scott: And in some cases, it's not a matter of is it as good as the in-person care. Is it better than the care they were getting because there was no care available at all in that location because of its remoteness.

You've had this technology for about for over a year, and it sounds like it's working pretty well for you. Are you planning on expanding your telepresence technology training in the school?

Valerie: Yes actually we are working with an inter-professional education team meaning that we are doing some work interdisciplinary with the school of social work, school of medicine, school of pharmacy, really just the whole umbrella of healthcare professions. Also, we're going to expand the operation to incorporate some other disciplines in our simulation education. We're also .  working on writing a grant right now where we'll be working with some public medical clinics in the community and public mental health clinics in the community where they are doing some training of our APRN students, psychiatric, family and nurse practitioners and adult gero clinical nurse specialists. So if this grant goes through then, the robot would be given or provided to each of these clinic operations as part of telehealth training expansion in all of this setting with our students and with the providers in that setting.

So lastly anything that you want to add? I think people might be curious about your simulation lab in general?

Scott: Well, we've built our simulation lab in 2015 expanding it and improved get from the one we built in 2008. And what we expanded on there was improving the video and audio capability. So, in our simulation lab when we come in and do a simulation, we have three cameras in each room. And a microphone, an overhead microphone, so we can capture all the audio and video that's going in. The operator and observers can refocus the camera, so they need to watch one particular person or need a more comprehensive view or something or close up view of like the student or nurse starting an I.V. they can do that, or it can be preset

Valerie: I would also add from a simulation perspective, we have the school of nursing building and within that it's almost like a miniature hospital. So, hospital beds, hospital lighting, version of central supply from a hospital that has all of the gauze and all of the equipment. So, lots of different levels of fidelity for simulation ranging from Robo APRN to the smart high-fidelity mannequins.

Scott: Yeah. We have a number of mannequins. They breathe. They talk either prerecorded or by a live operator in the control room. They have pulses and blood pressure, they'll bleed, you can start IV's on them. You can use real clinical equipment such as we can do a finger stick to check blood glucose on a couple of them. You can use real pulse oximeters on them; you can get real blood pressure cuffs on them. Their eyes will react to light. So, if it's appropriate, we can make them so their eyes their pupils dilate or don't. So, we can simulate different conditions that the students then have to look at. Collect all those facts. And then start formulating a plan of how we're going to deal with that. What do we need to communicate? What makes this particular vital sign important in combination with those others that I need to communicate that I'm with a nurse practitioner or physician to say hey my patient's condition is changing. Here's what I think we need to do.

Valerie: It's a thoughtful, structured simulation environment in the sense that students may spend an eight-hour workday in a simulation lab and then go through structured debriefings and reflection that are video-assisted and aided and then facilitated by expert faculty.

Scott: A large part of renovating our lab was creating that system to capture all those components, record and be able to stream them if needed but recording them so they can be reviewed later by the students and by the faculty to give constructive formulative and even some of the feedback if needed.