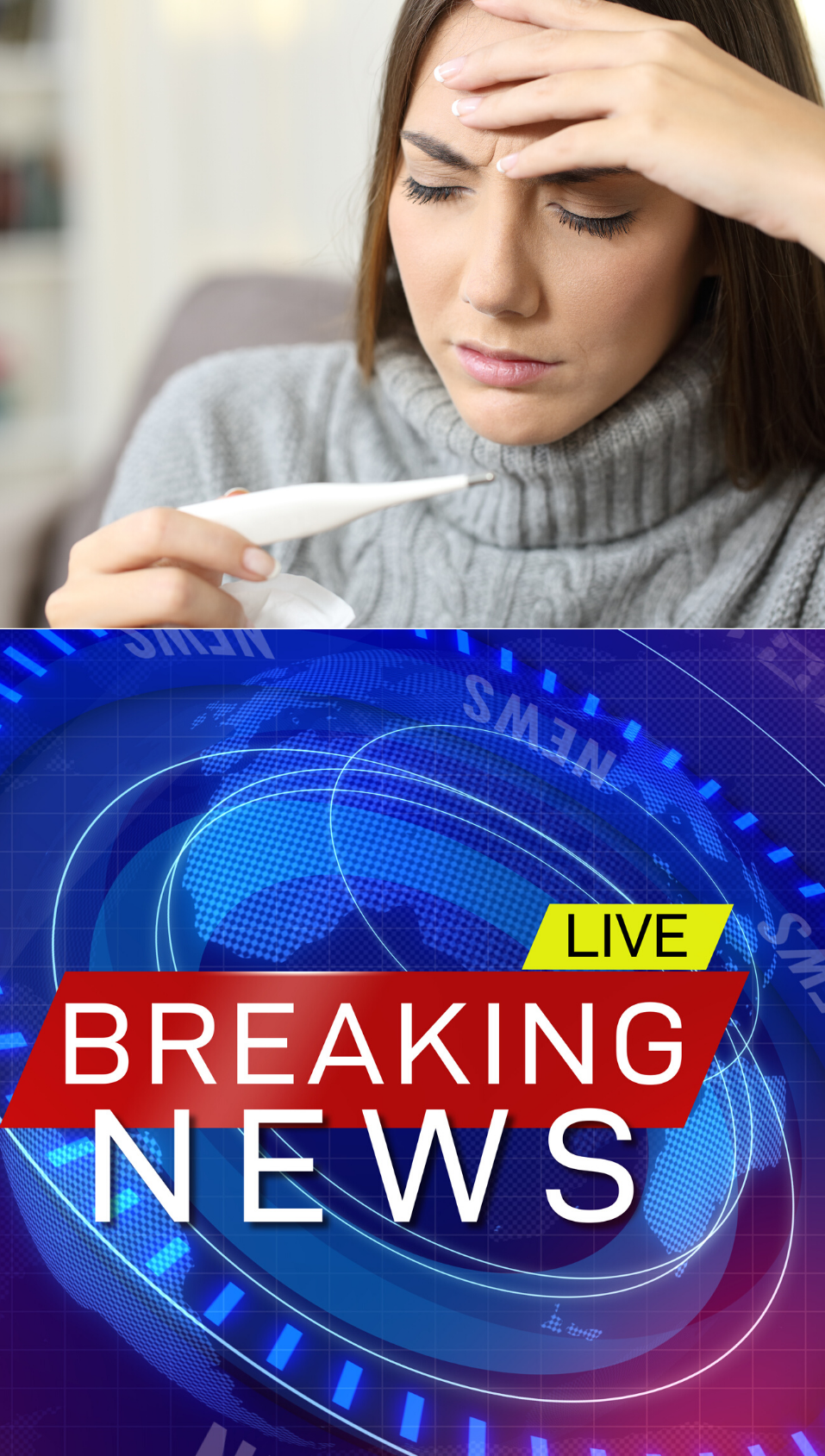 It’s certainly a unique time for those of us in the professional audiovisual industry. For designers, integrators, re-sellers and technology managers, the niche industry that usually consumes us with the deeply technical side of things has now shifted into mainstream conversations.

Why? As most of us have noticed, the news media, local municipalities, counties, schools and businesses have been working feverishly to convey critical information to the public about the recent outbreak of COVID-19, known commonly as coronavirus. While many may disagree about the severity of the virus, two things are certain. The virus is spreading, and businesses are cancelling conferences, meetings and other events to prevent their employees' exposure.

According to The Lancet, “the national security strategy for COVID-19 within China has shifted to so-called wartime control measures,” with cities on lock down. 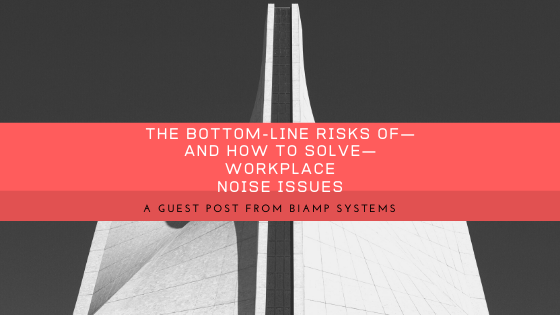 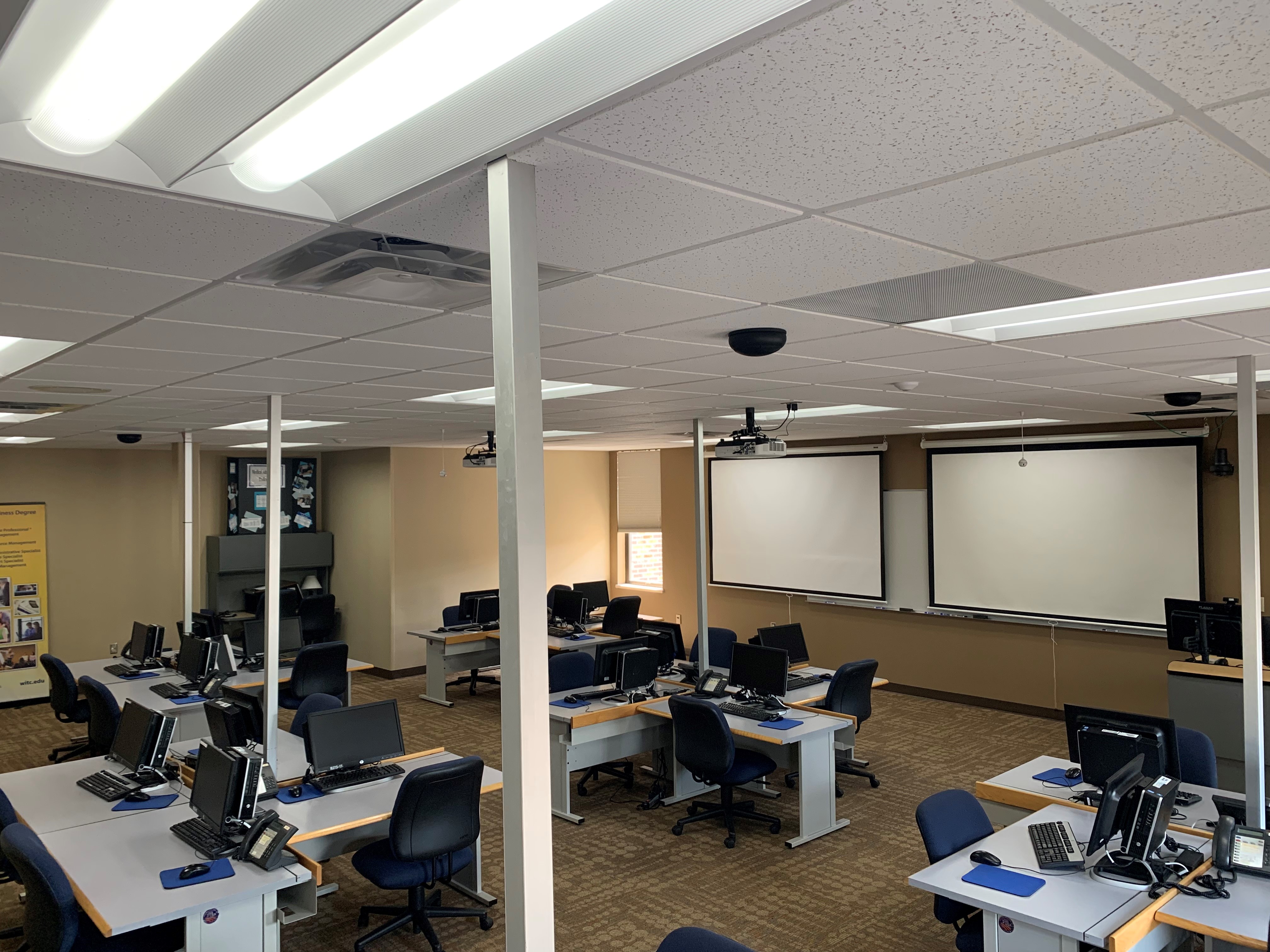 Recently, CRS caught up with Phoenix Audio Technologies to talk about some of their audio technologies that are helping colleges and universities meet their distance learning objectives. 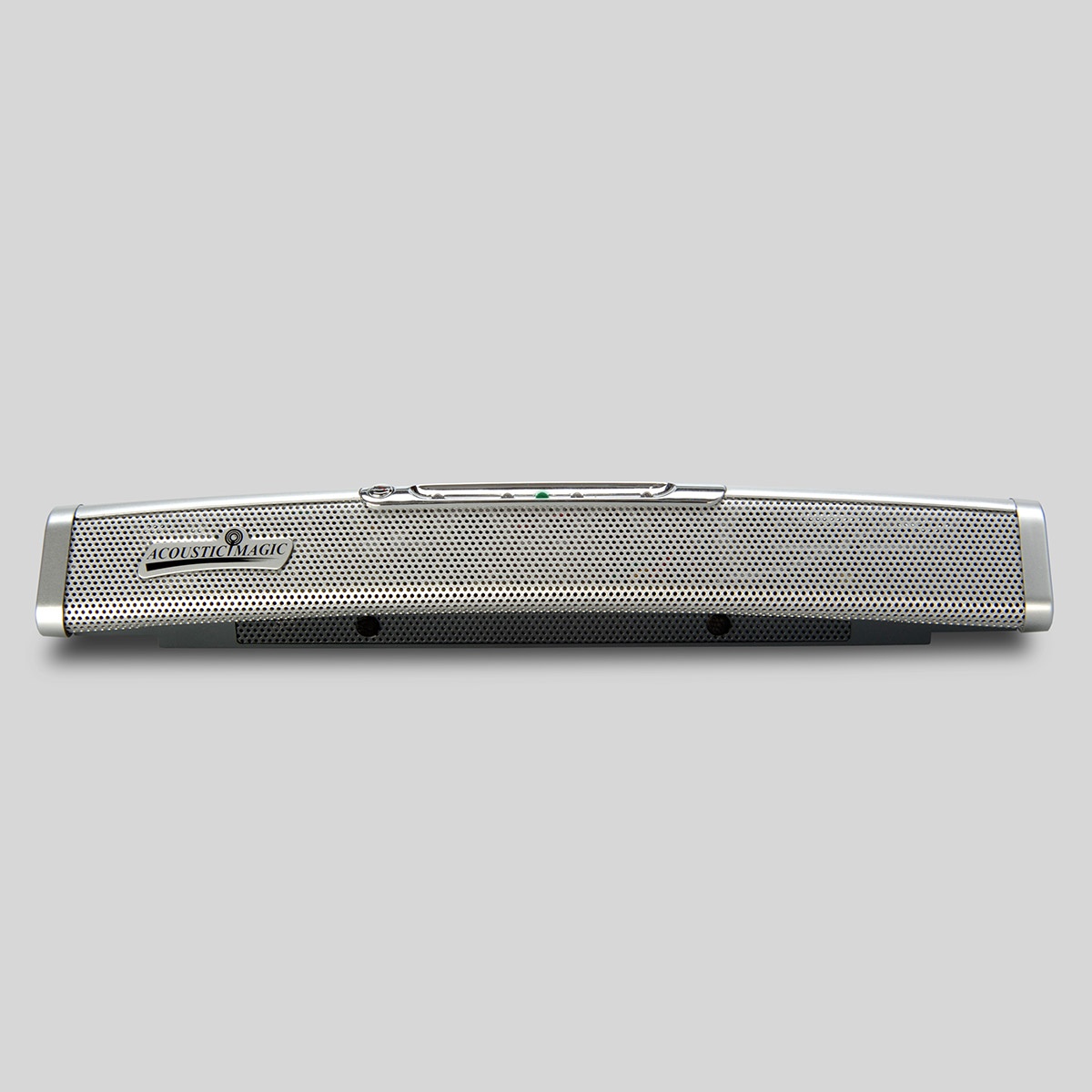 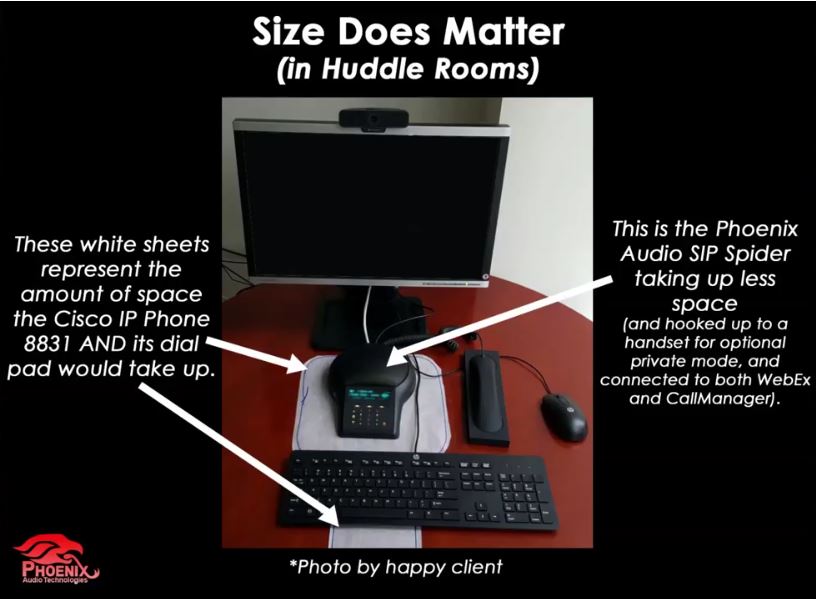 If you have spoken to one of dedicated account managers here at ConferenceRoomSystems.com you may have found out that we really like to recommend Phoenix Audio conferencing products. There are quite a few reasons why Phoenix Audio's USB, SIP and traditional analog PSTN conference phones fit the bill for many of our technology projects. Let's start with some basic reasons why we recommend Phoenix Audio and then we will review each major product in our video series below.

1. Quality: Phoenix Audio makes a high quality product. Every product is made from aluminum alloy, NOT plastic. It makes a BIG difference and  the build quality shows.

2. Support: Support is essentially non-existant. It's not that we don't want to help support our customers... It's the fact that the products just work and support/troubleshooting just doesn't come up with Phoenix Audio Products

3. Easy Installation: When it comes to installation everyone likes to hear Daisy-Chaining and Power Over Ethernet. These two features put Phoenix Audio above and beyond. Later in this blog post we will review there PoE USB 2.0 extension system, ceiling mounting solutions and daisy chaining in more detail.

4. Versatility: Phoenix Audio has managed to pack a ton of value into their small conference phones. When competitors are offering just USB or just analog phone support, Phoenix support both in a single model. As many of our customers make the trasisition from traditional audio conferencing to web-based communications it's nice to have product that can bridge the gap.

5. Asthetics and Design: Have you ever seen the size of a Cisco 8831? Check out the size difference. Enough said. Collaboration space design is more important than most manufacturers give it credit for. A good design can make all the difference for room functionality and ease of use. 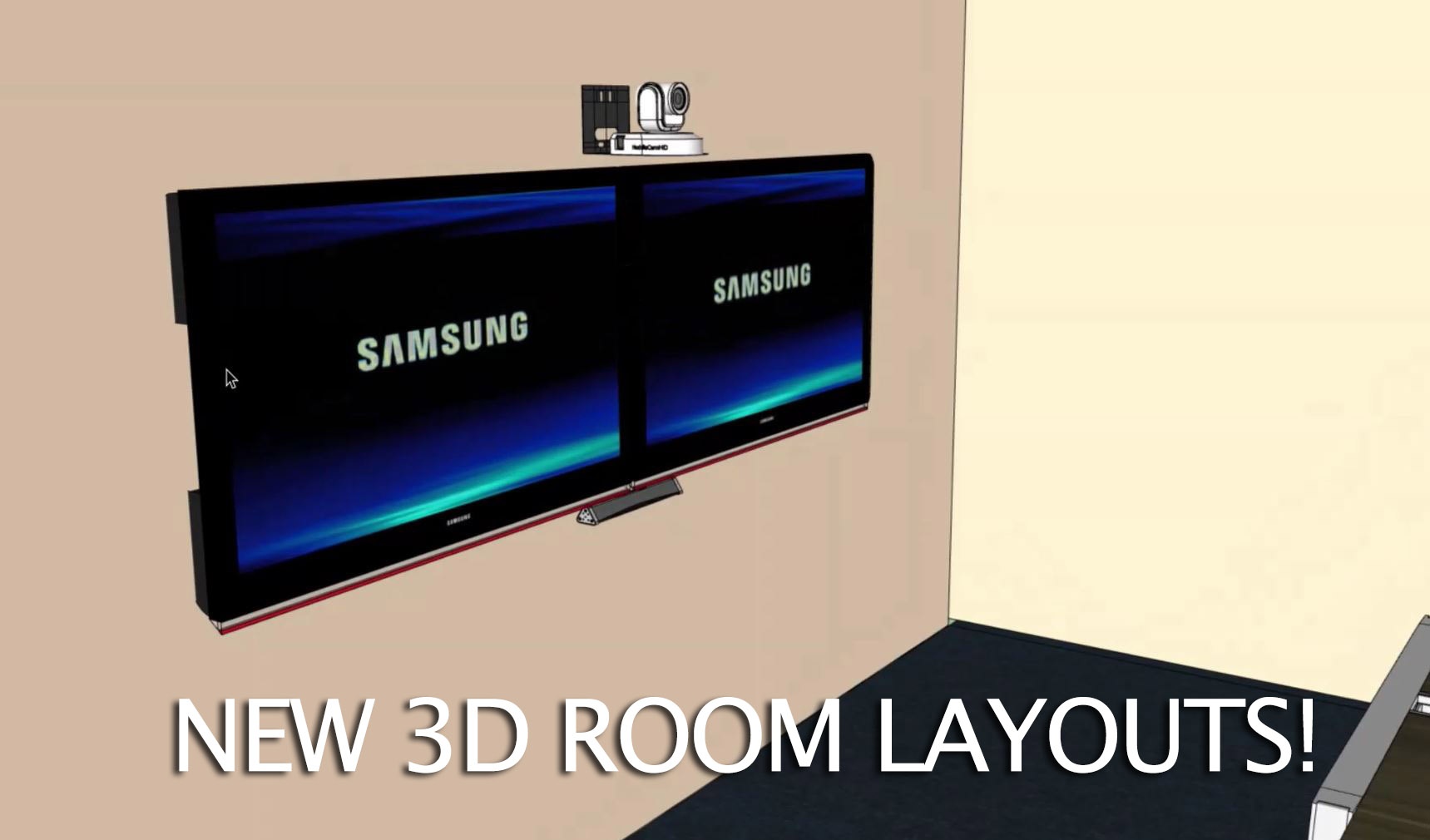 CRS is proud to announce we will be offering 3D conference room layouts with Google Sketchup! CRS is now offering 3D room layouts. We have a link below where you can get started with your next project to have a 3D rending made and drawn to scale! CRS is using Google Sketchup to create 3D Room Layouts for our customers audio visual projects. If you are working with an account manager from CRS, request a 3D rendering for your next project and meet with one of our engineers who can make you next project a success!

Choosing the Right Microphone - Listen to these recordings and sound great on your next recording! 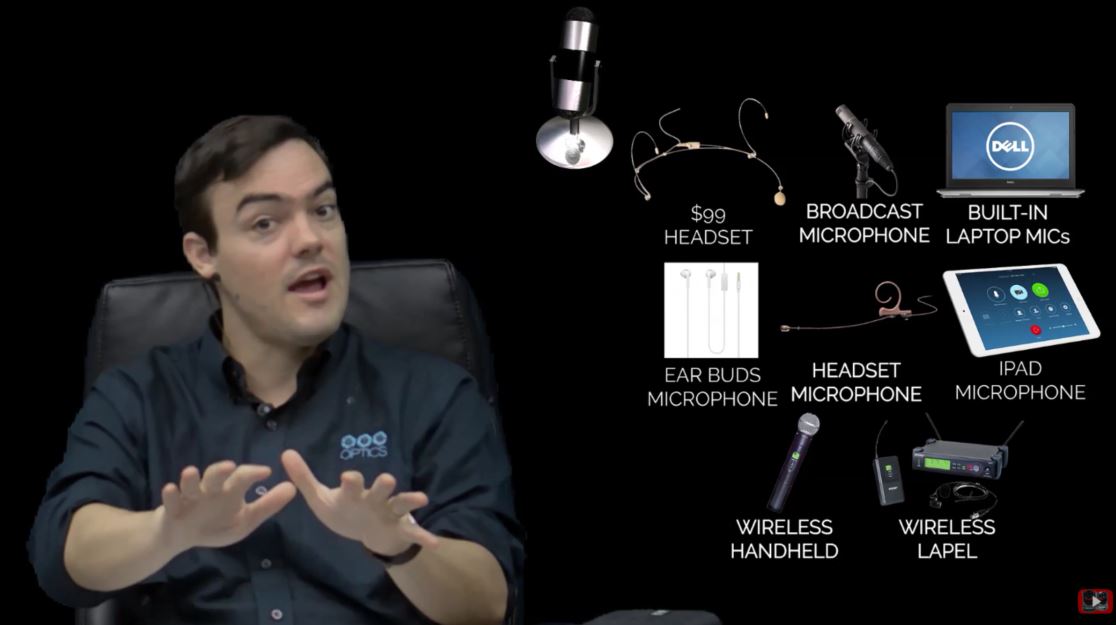 Two of the best audio experiences can be found using handleld and lapel (lavalier) microphones. Each microphone has its own best practices and use cases that we will review in this video. Both microphones are standards for public speakers, presenters, worship leaders and stage actors.

Finally clothing is a potential issue when it comes to lavalier microphones. Suggest clothing of natural fibers such as cotton, wool or a blend. Synthetic clothing can be an issue because it can cause rustling heard through the microphone. For men the best case scenario is business suit and/or a business tie. For women suggest something without any noise accent pieces that make ruffling sounds.

The best advice I have ever received about handheld microphones is that they pick up audio like a flashlight shines light. Generally, hold the microphone in front of you, pointed directly at your mouth. Ideally, we are suggest 3-6 inches from your face and about 1″ below your mouth. You want to speak directly into the hand-held microphone, so it can pick up your audio loud and clear. Avoid breathing directly into the microphone and use a wind-filter if your talent is creating any noises that are un-settling.

When it comes to microphones there is almost nothing like a head-worn (headset) microphone. In this video we review perhaps the most expensive head worn microphone the DPA D:Fine vs SAMSON XPD1. The DPA D:Fine microphones are used in the highest quality systems from Broadcast in New York to the filming of the Hobbit! These microphones are of the absolute highest quality. But they cost over $649 per system. Because budget is always a concern we wanted to compare and contrast the difference between the DPA D:Fine and a new product from SAMSON called the XPD1. The XPD1 is only $99 and it includes a complete wireless transmission system that uses 2.4 GHz. In this video we compare and contrast the differences, show some sample recordings and switch between both microphones live!

Another interesting topic in our broadcast microphone review is the effect of compression during a video conference call. For this review we take two audio clips and compare them. The first video clip is taken from Tom Sinclair’s “Streaming Idiots” show which was directly recorded to his laptop. The second clip was recorded on the far end of a Zoom Video Conference call. Both clips used the same broadcast microphone the Audio Technica AT897. (http://www.audio-technica.com/cms/wired_mics/9aeff7bd1ee954dc/index.html/) The microphone is mounted on overhead boom extension so you can’t see it in the video clips. It’s a condenser mic so it picks up every little sound in the studio. Ac, pc fan, any ambient sound gets picked up. Also picks up the ever so slight echo in a room with bare walls.

With our microphone and recordings at 128 Kbs as our constant we compare the audio quality when sent over the public internet using Zoom Video Conferencing. The video conferencing software has it’s own compression and audio algorithyms it uses to provide an ideal experience. As you can hear the audio is amplified quite a bit and the audio echo cancellation is also at work. Let us know what you think. Personally I hear some audio quality loss and a bit of the dynamic lows are missing.

This review provides recorded audio from built-in laptops and compares them with a professional headset microphone from DPA (D:Fine). This is the most common form of online video conferencing and most of our guests actually join our show with a built-in microphone laptop. What we found is that our audience has trouble hearing recorded content from such low quality microphones. Using a built-in microphone on a laptop or iPad is acceptable (not ideal) when you are using it for video conferencing. It’s not the best microphone but as long as you can be understood it should be fine. But when we are talking about broadcast microphones where a video is being recorded it’s really barely acceptable. The audio from a built-in laptop has to battle audio echo cancellation as it

The audio from a built-in laptop has to battle audio echo cancellation as the same device that is recording audio is also producing audio from the speakers. Laptops varying in quality but in general the audio quality is not why you buy a laptop. Therefore a built-in laptop microphone is almost the worst possible microphone you can use duing a live streaming, broadcast or professional recording.

So this review show the difference in quality when users select a professional head-worn microphone (we are using the DPA D:Fine) vs a set of standard earbuds that include a microphone. If you have seen our other videos a set of headphones with the microphone attached is still MUCH better than a built-in microphone on a laptop. But as you can hear these standard earbuds don’t offer much of a high quality experience. One of the main problems with these headphone style microphones is that they swing with the headphones and make a scratchy, ruffling sounds when moved around. They are a step up from standard built-in microphones but do not provide a broadcast quality audio sound that is worth recording in a professional environment.

Why the Wireless USB Speakerphone is so important... 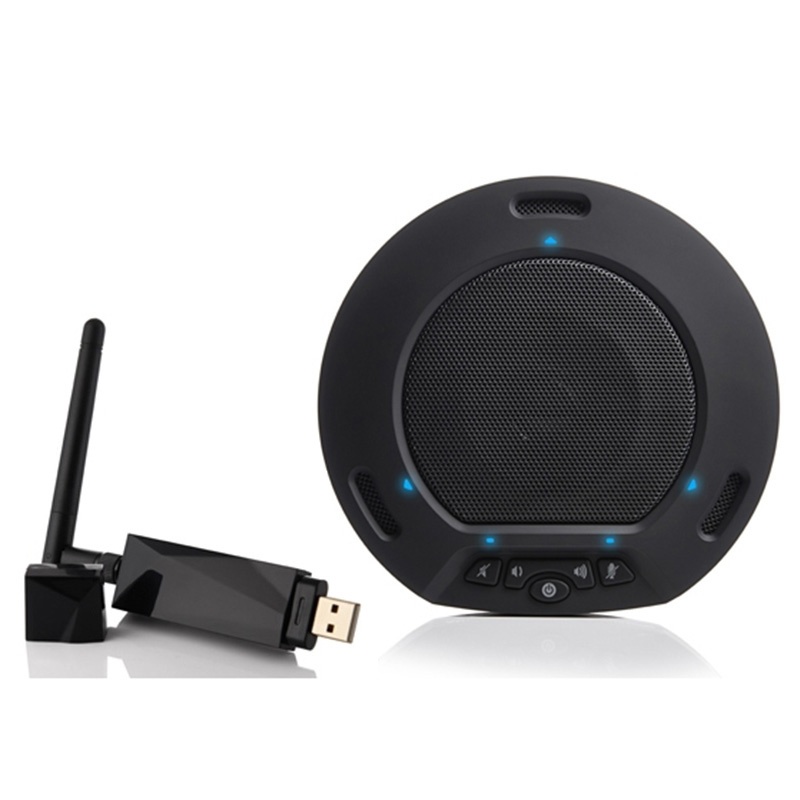 For those of you who follow the "USB Revolution" as Vaddio has popularly termed the shift toward "Web Conferencing Equipment" you have seen the many breakthrough's in this industry. Web conferencing software pioneers such as Skype, GoToMeeting and WebEX were years ahead of the hardware technology we are now using to create successful meeting spaces for web conferencing (Technology Timeline Here). Today we wanted to demonstrate a important breakthrough for USB audio conferencing and explain why it's so important for the industry.

The Future of International Business is Here.

Skype Translate is revolutionizing the world of international business

In December last year, Skype launched its Translate app preview which will revolutionize video calling forever. We live in a technological world where everyone is connected with their friends, family and colleagues through social media and social networking apps. The only barrier that stops us from connecting with new people is language. Language is the biggest barrier in communication even though English is the most commonly spoken language, still more than half of the 7 billion people on this planet cannot communicate in English.

A New Outlook, Skype for Business Now Integrated with Office 365

Skype for Business, Improved and Integrated with Office 365