Anyone who has tried to keep in contact while saving money has needless to say watched, as conferencing solutions have gone from something that kinda-sorta-maybe could be considered a video call to high-quality, interactive discussions.

In the past, we had just two real options: Skype and Microsoft Communicator. This is no longer the case. In fact, these days, solutions seem limitless—there is no potential end in sight for how many solutions may wind up on the market. And while having a wide selection is nice, it is also problematic when it leads to a plethora of so-called “standards”—none of which are then “standard” at all.

To avoid a future filled with compatibility issues and frustrations, it’s worth taking a closer look at which products are likely to succeed. Below, I discuss WebRTC and Microsoft Lync, both of which show promise as wide-spread, user-friendly conferencing platforms. Ultimately however, I believe Lync’s ability to interact with other Microsoft products and cell phones will make it the new standard.

But let’s start with WebRTC. WebRTC is one of the current “standards” being ushered onto the market; it’s attractive because it allows developers to support real time communications without the need for plugins, downloads, or installs. It’s natively supported by browsers like Chrome, FireFox, and Opera. You might notice the glaring hole in that browser list is Internet Explorer.

While other major browsers have jumped on the WebRTC bandwagon, Internet Explorer has been, mostly, holding out for Microsoft Lync integration (which was recently launched!) Now you can invite someone from outside of your Lync organization to login via a web portal and participate in a web conference call. Obviously the web version of Lync only appears to work with Internet Explorer for now… but that’s not really a surprise. Knowing Microsoft, they will eventually introduce “Lite” versions that are capable of working with Chrome, FireFox, Opera, and more.

While WebRTC may be able to keep costs to a minimum, it isn’t an easy fit for most large organizations, especially those already operating in the Microsoft world (as many do). Lync is beginning to show signs of becoming the ultimate business conferencing platform as a result of some strategic moves it has made. Lync is available on Windows phones, Windows tablets, and of course, Windows PCs. Microsoft even launched an Android and iOS client, but they’re not worth looking at… yet.  But what is encouraging is the fact that Microsoft recognizes the value in pursuing these other systems, even if they aren’t ready for the prime-time.

Lync becomes really exciting when we consider its potential. The ability to bridge communications between multiple Windows devices (and soon: non-Windows devices too) means we’re not far from a future where you can leave your PC behind and use only your mobile device for conferencing. This will become especially viable as processing speeds and memory continue to increase.

If Microsoft continues to make these strategic market moves, we’ll soon be able to walk into a store, purchase a Microsoft web conferencing camera and Microsoft audio conferencing pod, and communicate directly with “The Microsoft Cloud.” That’s exciting. I’m looking forward to a future where Microsoft could truly act as our UC business backbone. And who better than a company that has over 39 years of experience solving software problems in the business world. 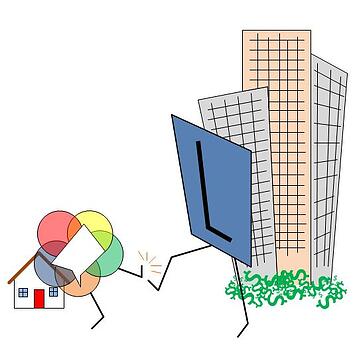